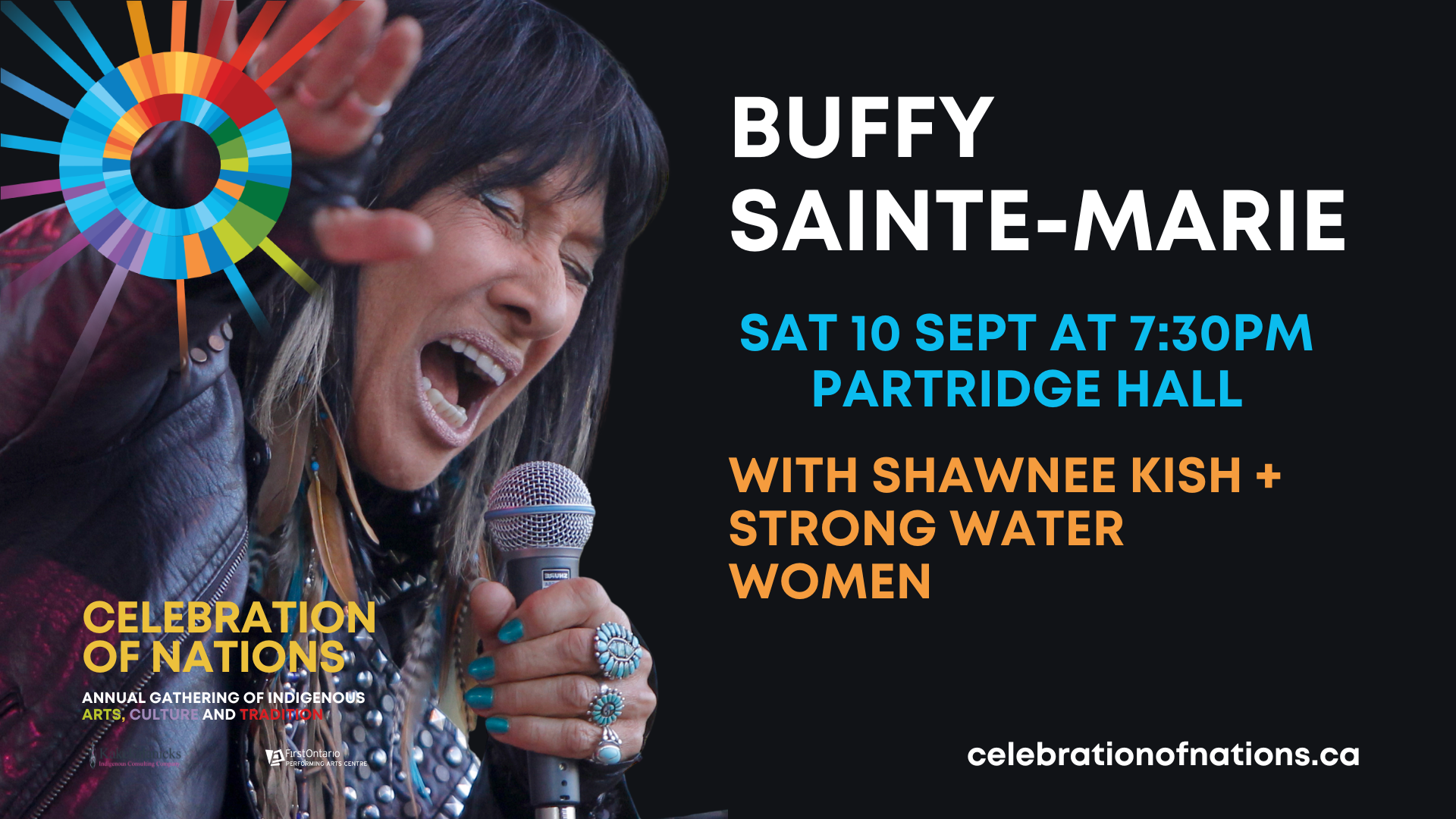 PARTRIDGE HALL Buffy Sainte-Marie is touring constantly, and coming off her critically acclaimed, award-winning albums Medicine Songs and Power in the Blood, nobody could ever accuse the Academy Award-winning songwriter of taking it easy. Since her groundbreaking debut, 1964’s It’s My Way!, the Cree singer-songwriter has been a trailblazer and a tireless advocate, an innovative artist, and a disruptor of the status quo.  Sainte-Marie has spent her whole life creating, and her artistry, humanitarian efforts, and Indigenous leadership have made her a unique force in the music industry. In 1969, she made one of the world’s first electronic vocal albums; in 1982 she became the only Indigenous person to win an Oscar; she spent five years on Sesame Street where she became the first woman to breastfeed on national television. She’s been blacklisted and silenced. She’s written pop standards sung and recorded by the likes of Janis Joplin, Elvis Presley, Donovan, Joe Cocker and Jennifer Warnes. She penned “Universal Soldier,” the definitive anti-war anthem of the 20th century. She is an icon who keeps one foot firmly planted on either side of the North American border, in the unsurrendered territories that comprise Canada and the USA. On her latest studio recording, the JUNO Award-winning Medicine Songs, Sainte-Marie doesn’t sugarcoat the truth or shy away from hard realities. At the same time, she is also never overwhelming or oppressive on this collection of nineteen songs that shine light on urgent subject matter including environmental destruction, alternative conflict resolution, Indigenous realities, greed, and racketeering. Rather than making us feel smaller, sadder or more cynical, Buffy Sainte-Marie makes us feel stronger and more capable of seeing the world around us clearly. Part rhythmic healing, part trumpeting wakeup call, Medicine Songs is the soundtrack for the resistance. Shawnee Kish is the winner of CBC’s 2020 Searchlight talent competition and one of the winners of the Allan Slaight Juno Master Class program for artist development in 2021. Kish has been celebrated as one of North America’s Top Gender Bending Artists (MTV), named by Billboard as an Artist You Need To Know, and continuously uses her music to empower. An outspoken advocate for her Indigenous and LGBTQ2+ communities, she is a proud Two Spirit Mohawk who has shared the stage with some of the world’s biggest names—Lady Gaga, Madonna, and Alicia Keys, to name a few.  Kish released her debut self-titled album in 2021 and was nominated for Contemporary Indigenous Artist of the Year at the 2022 JUNO Awards. She recently signed with Amelia Recordings, a boutique Canadian label, and has several songs ready to release in 2022, including “Mr. Tie” a no-holds-barred retort to every man who ever tried to make Kish into what she’s not, summed up in the lyric: “you don’t like my attitude / I’m good, boy, I don’t need you to.” She also continues her work with the We Matter Campaign and Kids Help Phone in hopes of empowering youth, providing strength, and hope through music. The Strong Water Women singers are a collective of Indigenous and non-Indigenous women. Created in 2015, this community-based initiative uses drumming and singing as a means of achieving wellness, strength and unity. Housed at the Fort Erie Native Friendship Centre, the group is composed of women from across the Niagara region. Regular: $59 Member: $49 University/College: $25 High School/eyeGO: $5 All tickets are subject to fees and HST.